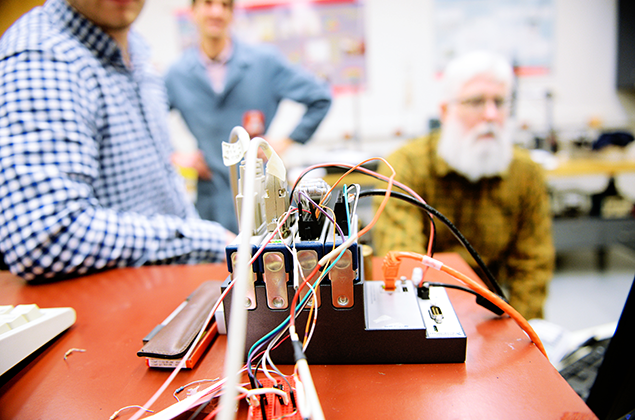 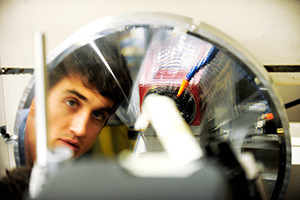 Star formation is the process by which dense regions within molecular clouds in interstellar space, referred to as stellar nurseries, collapse to form stars. The region of interest is stars that are 2,500 light years away from the earth – meaning the light reaching the telescope left the star 2,500 years ago.

The PEC, part of the Department of Mechanical and Aerospace Engineering (MAE), is assisting NASA’s Goddard Space Flight Center with its Balloon Experimental Twin Telescope for Infrared Interferometer (BETTII). BETTII is a binocular telescope that will be launched in a balloon to 26 miles above the earth’s surface. At its heart is a prototype optical system that uses interference between the beams of infrared light captured by each telescope to measure the position and spectrum of a star. The fine resolution of this binocular telescope can distinguish between single stars and multiple stars in stellar nurseries that are usually enshrouded by dust, which hides them at visible light wavelengths. Spectral measurements of the long-wavelength infrared signal may uncover proto-planetary disks and the temperature and composition of the dust that formed them.

The PEC has assisted with design modifications to the telescope structure and is in the process of building the optics for the pair of telescopes. Dow managed the project and, along with Furst, came up with the design for the mounting structures and the light-weight mirrors, while Garrard programmed the machine tool-path and developed the control software. The PEC is creating two identical telescopes. Each has a 21-inch primary mirror, an eight-inch flat turning mirror and a pair of smaller mirrors to turn and shape the light beams and deliver them to the interferometer.