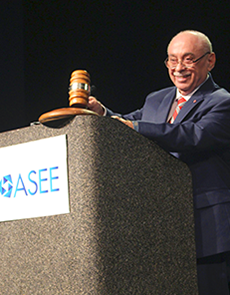 Engineering Dean Dr. Louis A. Martin-Vega assumed the presidency of the American Society for Engineering Education (ASEE) at the society’s annual conference on June 29.

“ASEE’s role in shaping the engineering education landscape has never been more important,” he said. “In order to solve the Grand Challenges of this century we are going to need a talented and diverse engineering workforce, and with its many resources ASEE helps its members do their jobs better. I’m honored to serve as president.”

Martin-Vega came to NC State in 2006 after spending five years as dean of engineering at the University of South Florida. He has also held several prestigious positions at National Science Foundation (NSF), including acting head of its Engineering Directorate and director of NSF’s Division of Design, Manufacture and Industrial Innovation. Additionally, he has served as chairman of the Department of Industrial and Manufacturing Systems Engineering at Lehigh University and Lockheed Professor in the College of Engineering at Florida Institute of Technology.

ASEE is a nonprofit organization committed to furthering education in engineering and engineering technology.