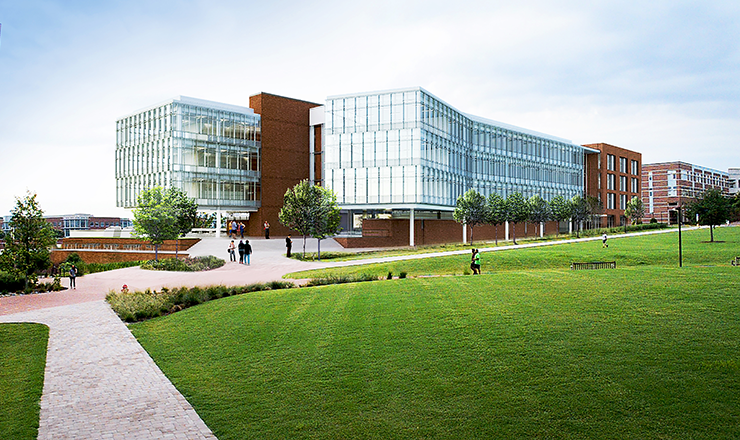 It’s been a great decade for the College of Engineering.

Over the last 10 years, the College has seen tremendous growth in enrollment, research funding, fundraising and faculty hiring.

Research expenditures have nearly doubled over the last decade, while research awards have more than doubled.

The number of master’s students in the College has more than doubled while the number of Ph.D. students has grown by 50 percent.

In the last five years alone, the amount of new annual gifts to the NC State Engineering Foundation has more than doubled.

The College is one of only two in the nation to lead two National Science Foundation Engineering Research Centers at once and is a leader in major research centers sponsored by the Department of Energy and National Security Agency.

But this is no time to stop. The best never rest.

Over the next five years, the College will invest $250 million in infrastructure and faculty hiring, moving closer to what Dr. Louis Martin-Vega, dean of engineering, has identified as its overarching goal: to become and be perceived as the leading public college of engineering in the nation and one of the premier colleges of engineering in the world.

The College will build a new cutting edge facility – the Engineering Oval building or EB Oval – to continue its move to Centennial Campus and hire 100 new faculty members to do groundbreaking, interdisciplinary research.

It will also bring the University one step closer to having a united College of Engineering on Centennial Campus. It’s a vision decades in the making and a move that will solidify NC State’s position as one of the top research-intensive public universities in the nation.

“Our College of Engineering is a powerhouse when it comes to research, outreach, economic impact and, of course, education,” said NC State Chancellor Dr. Randy Woodson. “These investments are a vital part of making our University and College even stronger. The strength of Engineering is a major driver for NC State’s brand and reputation.”

No one is standing still 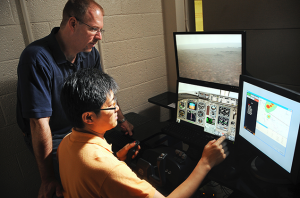 Across the country, states are recognizing the true value of their schools of engineering. These schools turn students into graduates who can improve their communities while earning good salaries. Their outreach programs expose grade school students to science, technology, engineering and mathematic (STEM) concepts and help make local industries more efficient.

The research that comes from engineering laboratories has a tremendous economic impact on their communities.

So engineering schools like Purdue University, Texas A&M University and the University of Florida have announced major investments in recent years. 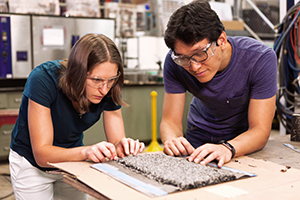 Along with serving their own states and communities, the nation’s engineering schools have been tasked with two high-profile challenges. The President’s Council on Jobs and Competitiveness has called on U.S. colleges and universities to increase the number of annual engineering graduates by 10,000. The National Academy of Engineering has identified 14 Grand Challenges for mankind to help guide engineering education and research in the 21st century.

With one of the largest and most reputable engineering schools in the nation, NC State will be called upon to play a major role in helping reach both of these goals.

Continuing the College’s upward trajectory while also continuing to play a significant role in addressing these important challenges will require investments in people and facilities. The College has an outstanding faculty and, on Centennial Campus, facilities that are second to none among engineering schools in the United States.

As the College prepares to hire 100 new faculty members over the next five years for positions in academic departments, centers and interdisciplinary clusters, continuing to recruit the absolute best candidates is a top priority.

“We compete against the very top ISE programs in the country, and this move is critical to help us recruit the right people.”

As dean of en 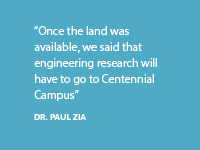 gineering in the late 1970s, Dr. Larry Monteith identified a need for more research space for the College. He tasked a committee made up of Drs. Paul Zia, Nino Masnari and Carl Zorowski, department heads in the three largest academic departments in the College, with finding the space.

It was no easy task. The site of the former Riddick Stadium was about the only vacant land they could identify on which to build.

In 1983, Gov. Jim Hunt announced plans to give part of the Dorothea Dix Hospital property south of Western Boulevard to the University. Zia, Distinguished University Professor Emeritus in CCEE, recalls being invited to the state capitol for the announcement.

“Once the land was available, we said that engineering research will have to go to Centennial Campus,” Zia said.

Since then, the College has built four engineering buildings on Centennial and has a presence in several others. Six of the College’s nine main academic departments have made the move, but ISE, CCEE and the Department of Nuclear Engineering (NE) are still waiting.

CCEE’s Mann Hall was built in 1964, ISE’s Daniels Hall in 1926 and NE’s Burlington Laboratories in 1953. These departments are doing groundbreaking work, but are dealing with facilities that are outdated. The size and shape of the laboratories don’t work. Students taking classes in Engineering Building III on Centennial Campus have electric sockets by their desks to power their laptop computers, while students in Mann Hall don’t.

“We have emerging programs in additive manufacturing and smart manufacturing, and the building simply cannot handle them right now,” Cohen said. “The infrastructure is not there.” 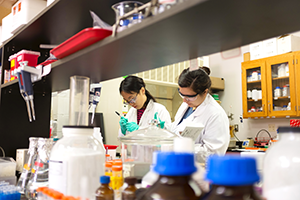 Dr. Morton Barlaz, department head in CCEE, had to relocate graduate students in order to make laboratory space for a new faculty member. Barlaz’s department has lab space in three different buildings and students based in five.

“I think right now some of our students might feel a little like orphans because so much of engineering is on Centennial,” Barlaz said.

If the department needs more electricity to power servers or laboratory equipment, it has to pay to increase capacity. If it wants to start a new research center, it will have to rent space. Those hits to the department’s bottom line take funds away from other uses. Before moving to Centennial, the Department of Computer Science was spread out over eight different buildings.

“We were very disjointed,” said Dr. Mladen Vouk, head of the department. “People would work in clusters but didn’t really know anyone else. That was not very helpful. The collaboration was reduced.”

Along with having better facilities, moving to Centennial will offer ISE and CCEE increased chances for interdisciplinary collaboration amongst departments. Cohen now describes Daniels as a square with four wings; faculty members in those four wings don’t have a chance to interact effectively with each other.

Being on Centennial and sharing lab space has led to increased collaboration between the Departments of Computer Science and Electrical and Computer Engineering and a joint networking degree program, Vouk said.

The passage of the Connect NC bond package by North Carolina voters in March provided $75 million for EB Oval. The NC State Engineering Foundation has raised more than $21 million of the $60 million in private donations needed to complete the cost of construction.

“The move of Engineering to Centennial Campus has been a priority on this campus for almost 20 years,” Martin-Vega said. “The Engineering Oval building is a major step toward completing the College’s move to Centennial and part of an important investment that will help NC State Engineering and the University reach its full potential.”