Three years out of mechanical engineering classes at NC State, Brooke Wages is giving back to the program that meant so much to her during her time on campus.

After three student internships with Marathon Petroleum, Wages was chosen to participate in British Petroleum’s competency-based rotational program for promising young professionals, gaining valuable engineering experience in a variety of positions. She is completing her last rotation in Houston, Texas, as an area maintenance engineer.

This year, Wages made a donation of $15,000 to the College’s Minority Engineering Programs (MEP).

“The experience and opportunities that were afforded to me by MEP are priceless,” she said. “I can never give enough to repay what the program has done for me, when it comes to my personal, academic and professional growth.”

MEP is a resource for African-American, Native-American and Hispanic students who want to become engineers or computer scientists. The program works to increase the College’s recruitment of students from underrepresented minority groups, help in retention of those students once they arrive on campus and aid in their personal, academic and professional growth both before and after graduation.

For more than two decades, MEP has offered tutoring, mentoring and a bridge program called STP (Summer Transition Program) that gives incoming minority students a head start on freshman year academics while introducing them to a network of NC State students.

Now, through new programs and partnerships, MEP is offering more help for students beyond freshman year and is tapping into new ways to recruit minority students into the College.

Everything MEP does starts with a support network that helps students handle being away from home and in an environment where they don’t see many classmates who look like them.

MEP director Angelitha Daniel and staff members Kesha Entzminger, Kimberly Pender and Dr. Javon Adams receive constant visits from MEP students who just want to check in and talk about how they are doing.

“If you ask students, they really talk about the community that they establish by participating in STP and MEP in general,” said Entzminger, who is associate director of both MEP and the College’s Women in Engineering program. “It’s something that we think about a lot.”

As Wages puts it, “MEP is family.” 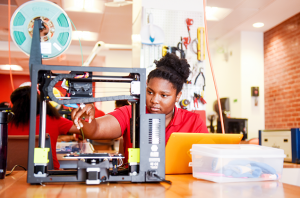 While many newly minted high school graduates might use the summer before freshman year to relax by the pool, students who participate in STP are asked to spend six weeks on campus taking math and chemistry classes.

They also get a chance to begin networking during industry visits and participate in sessions on important topics like diet and nutrition and keeping a budget. Plus, there’s time to hang out with a new group of friends and get accustomed to the freedom of college life.

“Getting to learn the campus before everyone arrived in the fall was a nice advantage to have,” Dr. Tylisha Brown said. “It was definitely a good decision.”

Brown participated in STP in 1994 and earned a B.S. in chemical engineering from NC State and a Ph.D. in the same field from Michigan State. This summer, she was back in the MEP fold, teaching a refresher chemistry course to this year’s group of STP students.

By the end of the summer, STP students have completed a college-level math course, along with that chemistry course and exposure to E 115, a computer course required for first-year students in the College.

Making research opportunities available for undergraduates is a College focus, and MEP has started a new summer program to ensure more minority engineering students are participating. The Minority Summer Research Program, which was piloted in summer 2015, pairs incoming minority freshmen with faculty members, and participants showcase their research in a summer undergraduate research symposium. The hope is that they will continue to work on research throughout their time on campus and consider attending graduate school.

After STP, MEP students can take advantage of professional development courses and tutoring resources and can be paired with an older mentor via the START (STudent Advancement and Retention Teams) Mentor Program. Khalia Braswell, a 2013 computer science alumna who went on to earn a master’s degree from UNC Charlotte, was paired with a mentor who played on the Wolfpack women’s basketball team and served as an inspiration. Braswell later served as an MEP mentor herself.

“I figured if she could play varsity basketball and get a computer science degree, then I could definitely do it,” said Braswell, who works for Apple, Inc. and started a Charlotte nonprofit called INTech that hosts software coding camps for middle-school age girls.

Just as important are the networking opportunities offered by MEP. Starting with that first summer in STP, MEP students receive instruction in professional development and are provided with opportunities to meet with industry leaders and apply for internships.

Andrew Pita, who earned electrical engineering bachelor’s and master’s degrees in 2008 and 2010, remembers mock interviews in front of his MEP classmates. He did student internships with IBM and ExxonMobil, where he accepted a position after graduation and now works in Houston, Texas, as a project manager.

“Because of the program, I was able to network with a lot of corporate recruiters who were looking for people like me,” he said. 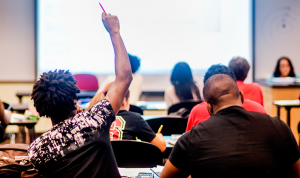 Each year, minority students make up about 10 percent of the College’s undergraduate enrollment. When it comes to graduate school, that number falls to about six percent.

That’s why Daniel would like to see the College establish a program similar to MEP that focuses on recruiting and supporting minority graduate students.

NC State is second in the nation among schools that are not Historically Black Colleges and Universities when it comes to the number of undergraduate degrees in engineering awarded to minority students.

Funding for scholarships would be key to taking the top spot, Daniel said. Georgia Tech is the leader in the category, and benefits from the state’s HOPE Scholarship Program that funds the education of Georgia residents at Georgia colleges and universities. Providing more scholarship dollars to talented minority students interested in the College is the key to increasing the numbers, Daniel said.

MEP has started new outreach efforts with the NC School of Science and Math and a Charlotte nonprofit called the YBM (Young Black Men) Leadership Alliance that are paying off.

YBM, a college preparation and leadership development program for young African-American men, brings students to campus to learn more about NC State and will be expanding into Raleigh with MEP’s help.

“About 10 percent of the African-American males in the College are as a result of our connection with YBM,” Daniel said.

The need for the kind of support that the program offers became especially clear when two MEP students took their own lives during the 2015-16 school year. The MEP staff took action, putting together a midyear motivational wellness retreat. With sponsorship funds from Praxair, Inc., they took students to Winterplace Ski Resort in West Virginia for a weekend to regroup before mid-term exams and snow ski, a first for many of the students.

As soon as they arrived, students participated in a Skype session with a university counselor to talk about stress, knowing when it’s not normal and knowing when to reach out for help.

On a Tuesday during the semester, Daniel bought boxes of Krispy Kreme doughnuts and simply asked students to stop by the MEP offices in Page Hall to check in.

“Students came in, just for us to see their faces and let them know that we are thinking of them.”

When Daniel isn’t on campus working with current MEP students, you might find her off campus continuing to support alumni who have graduated from the program. She receives invitations to concerts, weddings, baby showers and other big life events for students she has mentored.

“When I was at my highest and lowest Ms. Angie was there,” Wages said. “(She) found me tutors freshman and sophomore year, and the MEP office always made themselves available. They are awesome.”