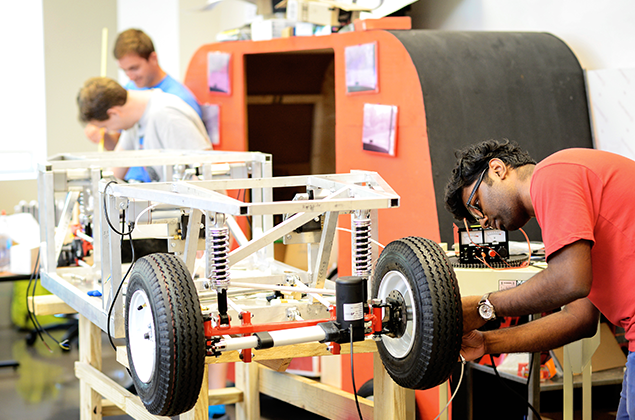 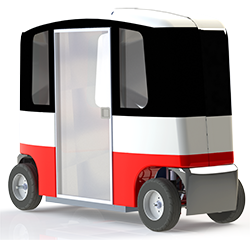 Two faculty members in the College are creating a new transportation system that would link Centennial Campus with the University’s main campus.

The EcoPRT (ecological personal rapid transit) is an ultra-light and low-cost transit system featuring autonomous two-person cars that would drive on a guideway railing system. NC State engineers Marshall Brain, director of the Engineering Entrepreneurs Program, and Dr. Seth Hollar, teaching assistant professor in the Department of Mechanical and Aerospace Engineering, have been working on the project since 2013.

The pair has proposed an EcoPRT system to run from James B. Hunt Jr. Library on Centennial Campus to D.H. Hill Library on North Campus.

“We’re going to completely revolutionize transportation on NC State’s campus,” Brain said of the project’s impact on campus travel. “If we can get this built, and get the two libraries connected together – it just makes the two campuses feel like one.”

The first prototype has been run on a test track run behind Engineering Building III on Centennial Campus. “This track will help to provide a proving ground for burning in vehicles before they would be tested out in the wild. It’s an exciting step,” said Hollar.

With the help of a $300,000 grant from the North Carolina Department of Transportation, Hollar, Brain and a group of engineering students have begun work on building five cars. Currently, a second prototype, the first car for the grant, is being built. The frame for this new model was designed by students and then fabricated by an outside company.

The fabrication of the outer shell, creating the mold and making multiple copies for multiple vehicles will also be outsourced to two companies located in the Carolinas.

Currently, the second prototype is a shiny metal frame, measuring 31 inches wide and 7 feet long. Changes from the first prototype to the second include the aluminum frame, overall reduction of vehicle weight, the addition of custom made air conditioning, brakes, and suspension that were not initially part of the first vehicle design. Hollar jokes that a cup holder may be part of the new design as well.