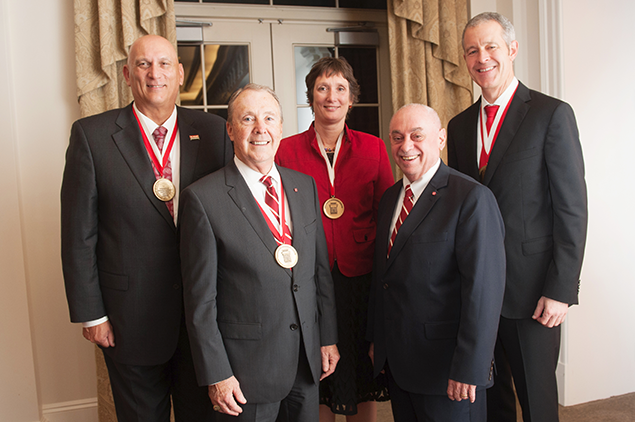 The College of Engineering at North Carolina State University bestowed the Distinguished Engineering Alumnus Award on four deserving graduates during a ceremony on Friday, Oct. 30.

The award honors alumni whose accomplishments further their field and reflect favorably on the university.

“This university is fortunate to have alumni like the four being honored here tonight and the many who have been honored in the past,” NC State Chancellor Dr. Randy Woodson said during the ceremony. “They stand as examples of how an engineering education opens doors of opportunity and success.

“We talk about how NC State and the College of Engineering are major contributors to the economic well being of our state, nation and world. These honorees illustrate, on an individual level, how true that statement is.”

Dr. Michael W. Creed earned a bachelor’s degree in civil engineering in 1973 and his master’s degree in engineering in 1984 from NC State. He went on to earn a Ph.D. in urban planning from UNC-Chapel Hill in 2010. Creed is a co-founder of McKim & Creed, an engineering, planning and surveying firm. He has retired from his position as CEO of the company but continues to serve as chairman of the board. Creed and his company have provided vital financial support for NC State and the Department of Civil, Construction, and Environmental Engineering (CCEE), including funds to provide internship opportunities for NC State students at McKim & Creed. He was one of the original members of the CCEE advisory board and served three years as chair of the department’s Zia Distinguished Lecture Series. He has served as a guest lecturer in CCEE and has given time volunteering with student organizations.

Elin E. Gabriel earned a bachelor’s degree in chemical engineering from NC State in 1985. She went on to earn an MBA from the College of William & Mary. Gabriel is vice president of global operations for H.B. Fuller, a $2.1 billion global corporation that focuses on adhesives, sealants and other similar specialty chemicals. She currently serves as an executive officer of the company with direct responsibility for manufacturing plants in the United States, Latin America, Europe and Asia. After working as an engineer with Advanced Micro Devices and Honeywell International, she served in multiple plant manager roles and later as director of operations for performance products with Honeywell and then held a number of corporate leadership roles with several multinational companies. She is a member of the university’s Wallace Carl Riddick Society and created the Elin E. Gabriel Scholarship in Chemical Engineering. Gabriel has also given of her time, speaking to senior design students in the Department of Chemical and Biomolecular Engineering.

General Raymond T. Odierno earned a master’s degree in nuclear engineering in 1986 from NC State. He is also a graduate of the United States Military Academy at West Point, Army War College and Naval War College. He was Chief of Staff of the U.S. Army from 2011 to 2015. During more than 38 years of service, he has commanded units at every echelon, from platoon to theater, with duty in Germany, Albania, Kuwait, Iraq, and the United States. After his assignments with U.S. Army Europe and at Fort Bragg, NC, Odierno served as a commander during deployment for Operations Desert Shield and Desert Storm. He later served as a commander during Operation Iraqi Freedom and in subsequent operations in Iraq. Other significant assignments include: Arms Control Officer, Office of the Secretary of Defense; Chief of Staff, V Corps; Assistant Division Commander (Support), 1st Armored Division; Deputy Commanding General, Task Force Hawk, Albania; and Assistant to the Chairman of the Joint Chiefs of Staff.

Jeffrey E. Williams earned a bachelor’s degree in mechanical engineering in 1985 from NC State. A Caldwell Fellow during his time on campus, he studied abroad at Oxford and trained at the Center for Creative Leadership in Greensboro, NC. He later earned an MBA from Duke University’s Fuqua School of Business. Williams worked for IBM from 1985 to 1998 and joined Apple in 1998 as head of worldwide procurement. He held a variety of roles at Apple, including leading iPod Operations and iPhone Operations. Williams is currently senior vice president in charge of all operations for Apple worldwide, including supply chain, service and support. Williams has been a generous supporter of NC State, providing funding for the Caldwell Fellows program’s Center for Creative Leadership and hosting students from the Engineering Entrepreneurs Program and the university-wide Entrepreneurship Initiative for visits to Apple’s headquarters during their trips to California.