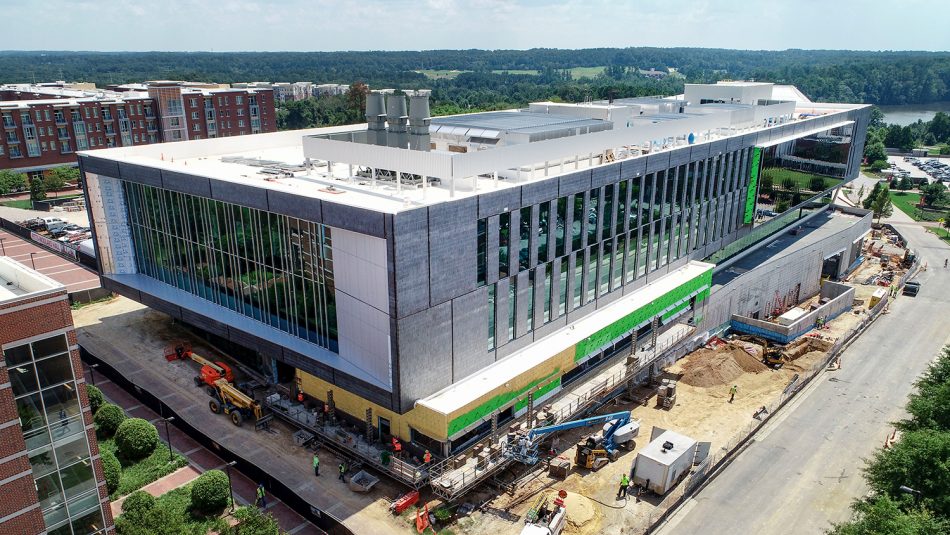 With hopes of new innovation, alumni and friends of the College share why they support Fitts-Woolard Hall
It’s been almost a year since the University broke ground on the new Fitts-Woolard Hall on Centennial Campus. This new building is integral to helping the College come together on one campus and in helping meet the demand for engineers and computer scientists. Meet three alumni and a friend of the College who have supported the project and are helping to facilitate innovation in research and education.

Think and Do the Extraordinary, the Campaign for NC State: Fitts-Woolard Hall
In this January 2019 video, Dr. Louis Martin-Vega, dean of the College of Engineering at NC State, talks about how the college continues to rely on the generosity and support of alumni and friends to raise the remaining funding for Fitts-Woolard Hall. Over $47 million has been raised but over $12 million is left to be raised. In the last decade the college has made significant progress in terms of its national reputation, attracting outstanding faculty members and students. Dr. Martin-Vega points out that the continuation of this trend really depends on the completion of Fitts-Woolard Hall with private fundraising instead of having to turn our financial resources into debt servicing for the building.

Support of Fitts-Woolard Hall offers unique opportunities to current and future students
On Friday, April 20, 2018, the University broke ground on Fitts-Woolard Hall, the crucial next step in the College’s move to Centennial Campus. The new building will bring together innovators from the Department of Civil, Construction, and Environmental Engineering and the Edward P. Fitts Department of Industrial and Systems Engineering (ISE). Meet two alumni who have supported the project and are helping continue the College’s excellence in engineering.

R. A. Bryan Foundation has a tradition of multigenerational giving
Some of the most generous supporters of NC State University and the College of Engineering come from multiple generations of family members who have attended NC State. The Bryans are one such family.

Alumnus’ ties to NC State inspired endowments
If you ask Glenn Futrell what drew him to NC State, he will share about growing up on a farm in Wayne County, NC, and speak of his father’s best friend Mr. Raymond Bryan, BSCE ’53, president and part owner of T.A. Loving Construction Company.

“It’s more than a building”
Alumni share why they donated toward the new Fitts-Woolard Hall.

A Wolfpack family gives back
Pack loyalty prompts the Sigmon family to make generous gifts to the College of Engineering and the University.

Alumna continues her support of the College
When Rashida Hodge established a scholarship in the College of Engineering, she didn’t name it after herself. Her recent pledge to help fund construction of the newest engineering building on NC State’s Centennial Campus includes naming rights for a foyer in Fitts-Woolard Hall (formerly Engineering Building Oval). She won’t put her name on that, either.

Alumni support Fitts-Woolard Hall to help future students
Meet three NC State alumni who share why they donated toward the new building and why you should consider doing so as well.

Donating for the future
Alumni share why they have decided to support the new Fitts-Woolard Hall project.

Sustaining Support
Dr. Thom Hodgson, Distinguished University Professor and Alumni Distinguished Research Professor in the Edward P. Fitts Department of Industrial and Systems Engineering, has been at NC State University for almost 35 years in a variety of roles.